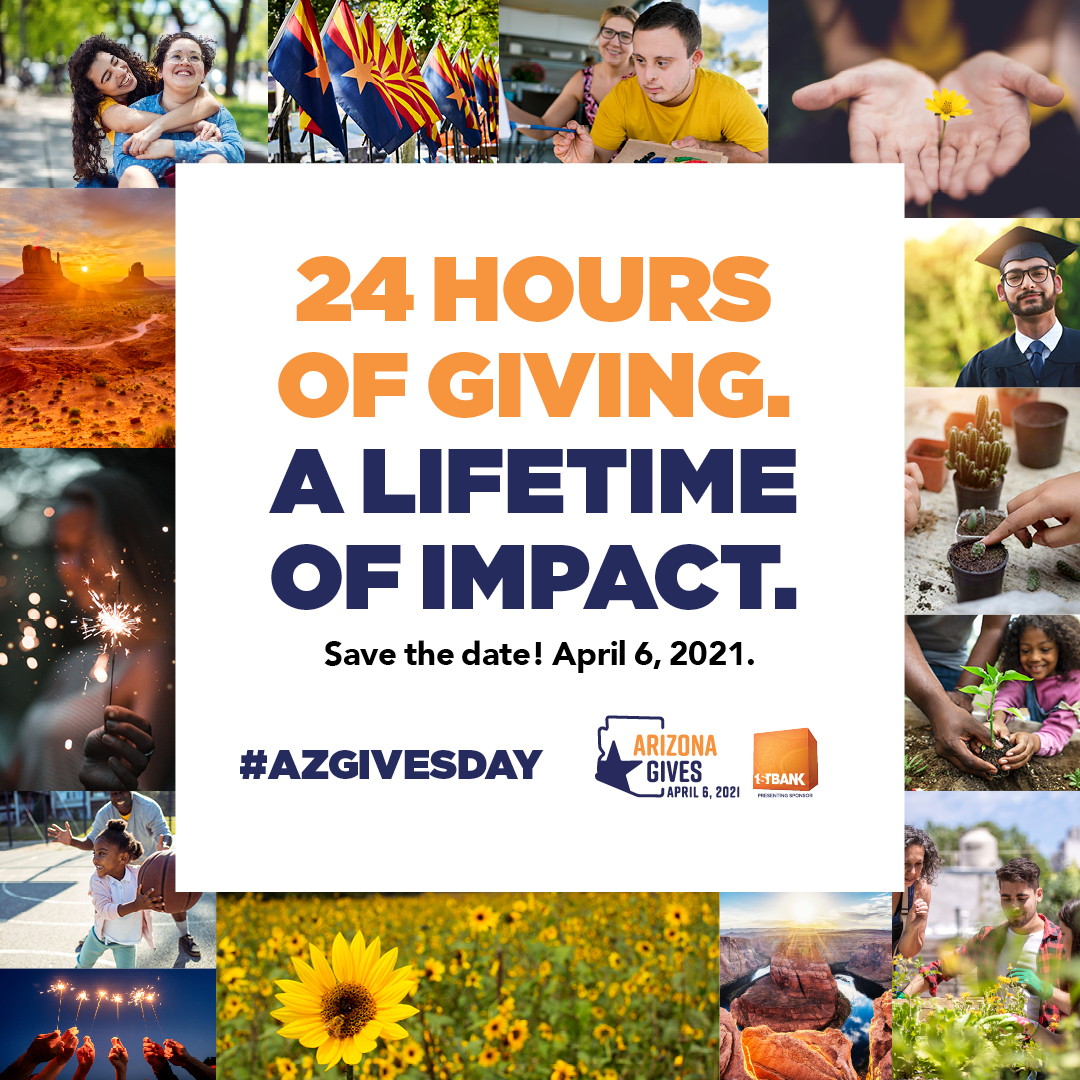 Arizona Gives Day is a state-wide 24-hour period of giving. This year on Arizona Gives Day, Be Kind Project is asking for donations to support medical care needs for the dogs at Southwest Oasis Labrador Rescue (SOLR). SOLR is an Arizona rescue organization helping displaced Labradors and Labrador-mixes find new loving homes for the remainder of their lives.

It was October of 2020 and Arizona-based Southwest Oasis Lab Rescue was contacted about a 2-year-old dog seeking shelter under a truck on the streets of Mexico, slowly starving to death. Thankfully SOLR’s veterinary contacts in Mexico were able to take the sick dog in quickly and start the critical treatment he needed. The dog was located,  given immediate medical attention and named Sawyer. Sawyer was diagnosed with a number of concerning issues including valley fever, tick fever, TVT cancer and malnourishment. 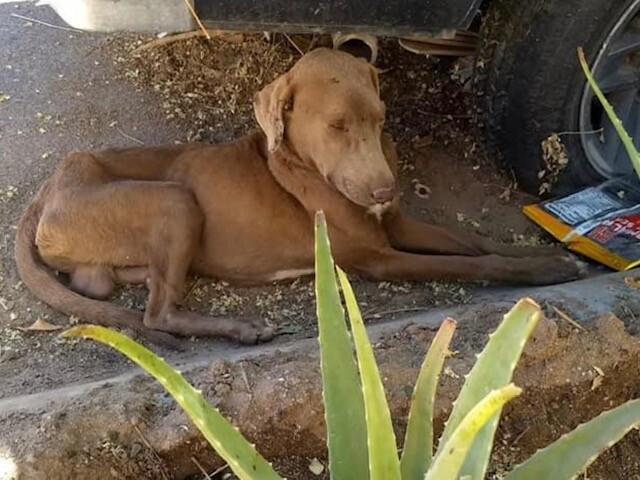 After months of treatment, Sawyer was strong enough to make the trip to Arizona in January of 2021. Upon entering his foster home, he was everything you would expect from a 2-year-old dog. He was playful, finding joy in chasing around his foster siblings and playing with toys. Of course he lacked some household manners and was a bit mouthy, much like you’d expect from a stray puppy. Surprisingly, he quickly caught onto basic commands like sit, down, and stay, showing his intelligence. After a couple weeks in his foster home, he was finally ready to find his forever home! Unexpectedly, the day after he was adopted to a family in Tucson, Sawyer began limping and acting lethargic. 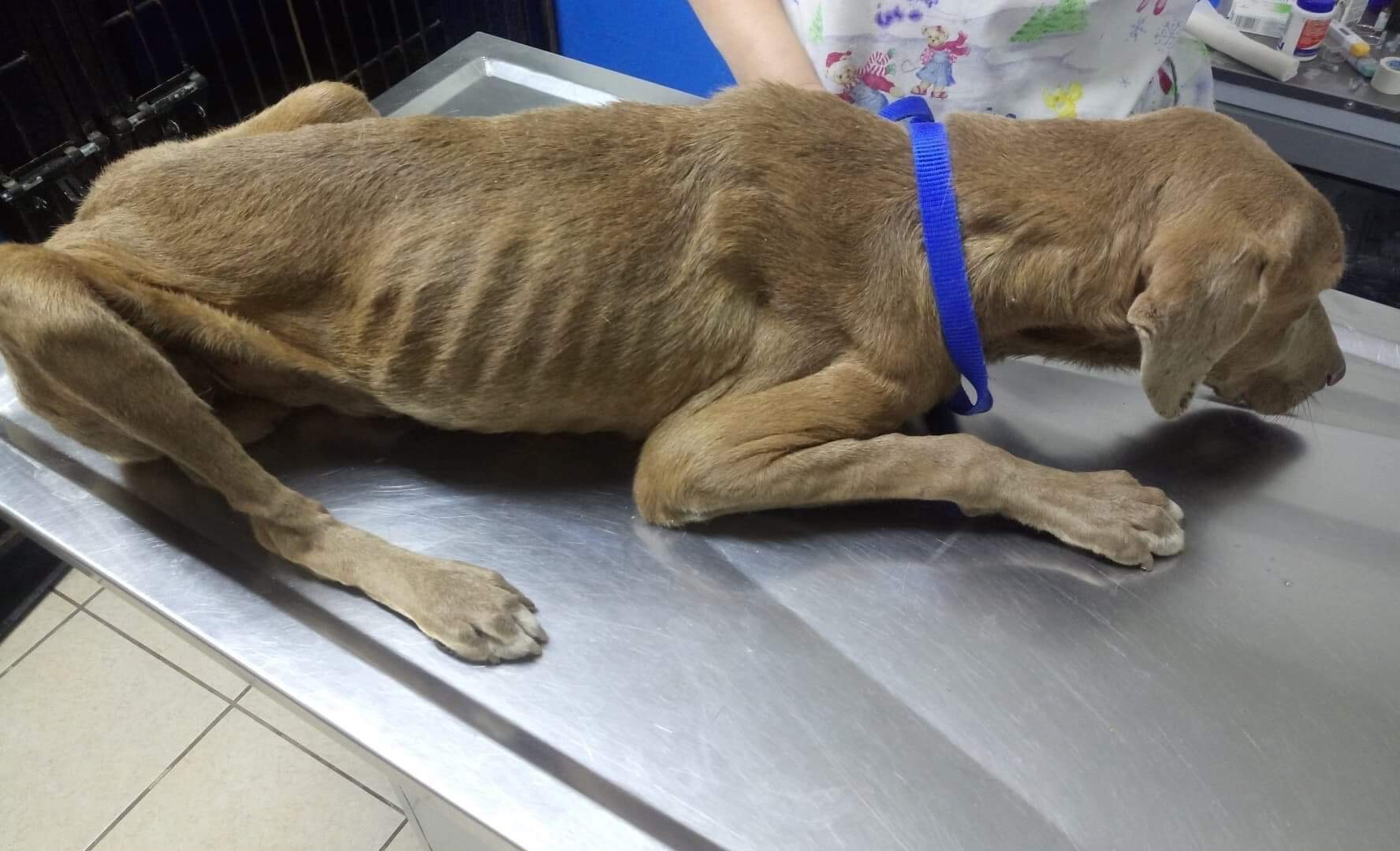 Shockingly, within days of Sawyer finding a loving family, he lost all ability to stand or walk.  Alarmed, his adopters took him to the vet who was unable to determine a cause after various testing. Reluctantly, his adopted family made the difficult decision that it was best to surrender Sawyer back into the care of SOLR for further evaluation. His previous foster home welcomed him back, despite both working full-time jobs. Although they got him treatment quickly, poor Sawyer started to take a turn for the worse. He was hospitalized for several days, given IV fluids, antibiotics, pain medication, and monitored closely for comfort and signs of progress.

The vets continued to run a myriad of tests, including diagnostic x-rays but not finding answers to why this 2-year-old pup couldn’t stand or walk. Finally, it was believed he had an infection on his spinal cord, along with a possible ruptured disc. He was sent home, only to get worse. In order to go to the bathroom, Sawyer’s foster parents would carry him outside, lay him on the turf and watched him struggle to go potty while laying down. They would then move him to a separate area to clean him up. At this point, vets were concerned that Sawyer may continue to have more bad days than good and initiated the difficult discussion of humane euthanasia. 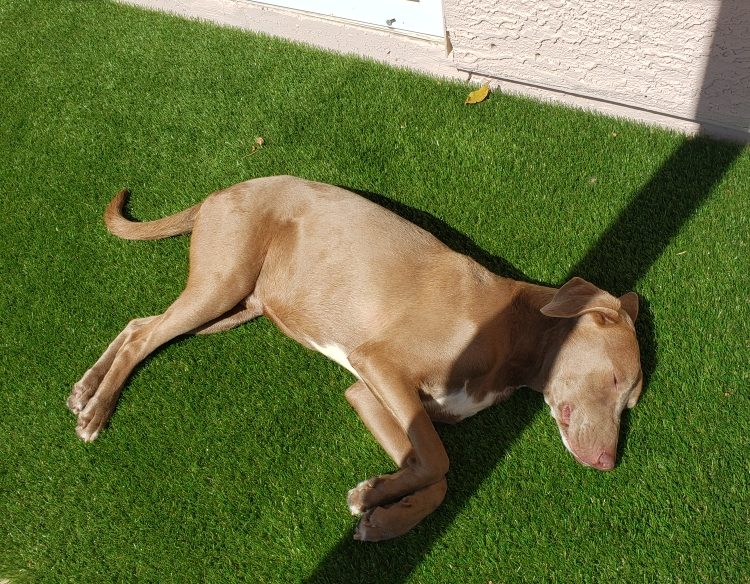 “Sawyer must have overheard the conversations” according to his foster parents, because within days he perked up and began crawling/scooting around. Still baffled by his inability to walk and the lack of answers, his foster parents got him an appointment with a veterinary neurologist. More tests were run including an MRI of his spine, a spinal tap, blood tests, and additional x-rays. At last, a diagnosis for Sawyer was made! Sawyer was suffering from a bacterial infection in his spinal fluid called polyradiculoneuritis. This condition was causing inflammation of the nerve roots in his shoulders and blocking the neuro-pathways between his front legs and his brain, rendering him unable to stand or walk. It also caused protein to leak, leading to deterioration of his shoulder muscles. Given the new diagnosis, Sawyer was started on specific  antibiotics. 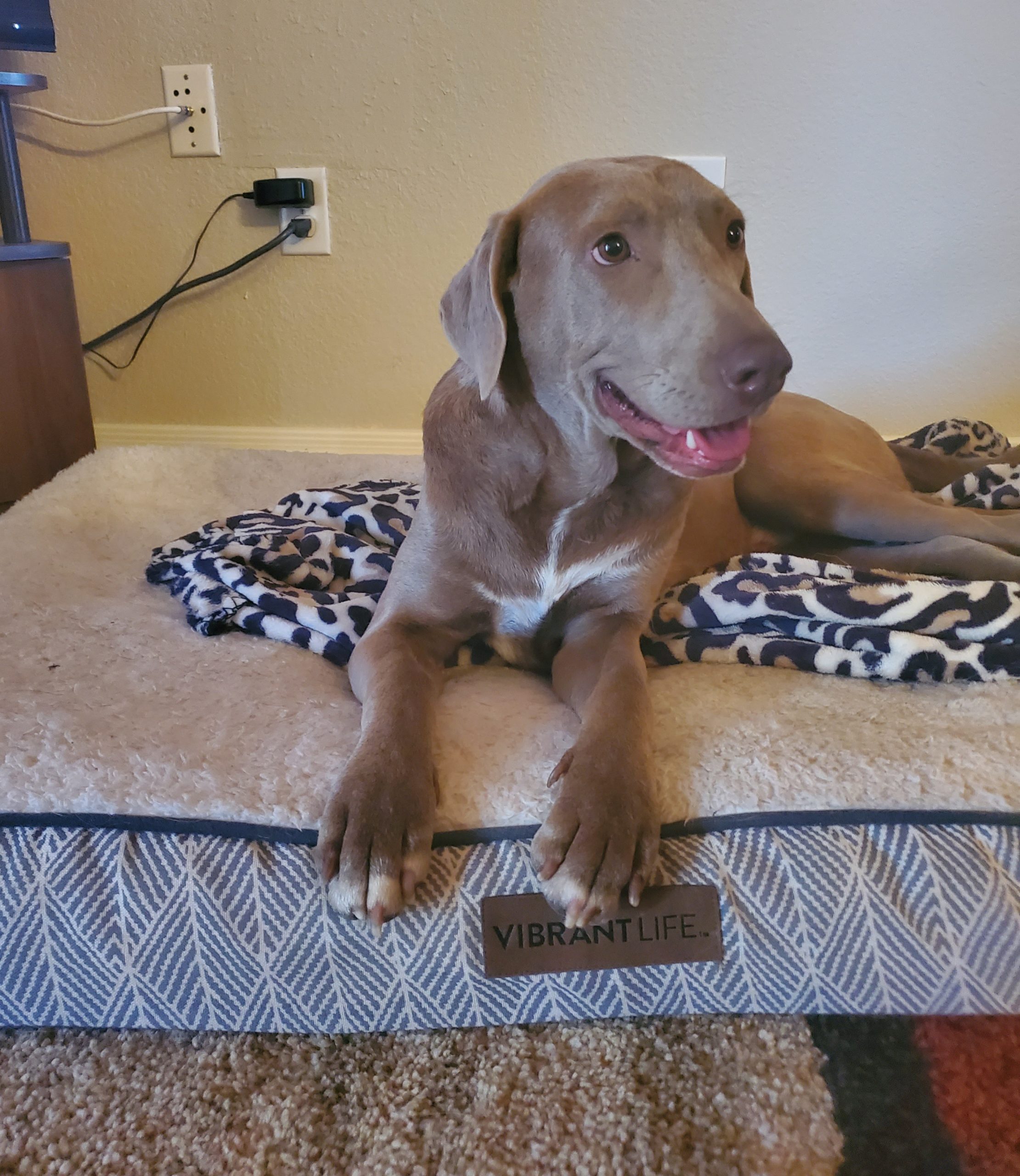 On March 3, five weeks after he lost all ability to stand or walk, Sawyer stood up on his own and took three steps! From that point, he hasn’t slowed down and continues to progress forward. Once confined to the bathroom with potty pads, a soft bed, water and a chew toy, Sawyer now has free reign of the house and yard. On March 14, Sawyer went for his first walk through the neighborhood since losing his mobility. His muscles have deteriorated, so it will take time for him to rebuild his strength and endurance. Thankfully, all signs point to a total recovery, which means he will eventually search for a final forever home!
It’s estimated that Sawyer’s medical bills will eventually total $7,000. Despite that, his adoption fee remains the same at $365. With most rescue dogs, just basic vet care (spay/neuter, shots, bloodwork, exam) cost around $350. Any extra medical costs push well beyond the adoption fee. In 2020 alone, SOLR spent $69,000 on vet bills, $8,000 on medications and $1,750 on microchips. 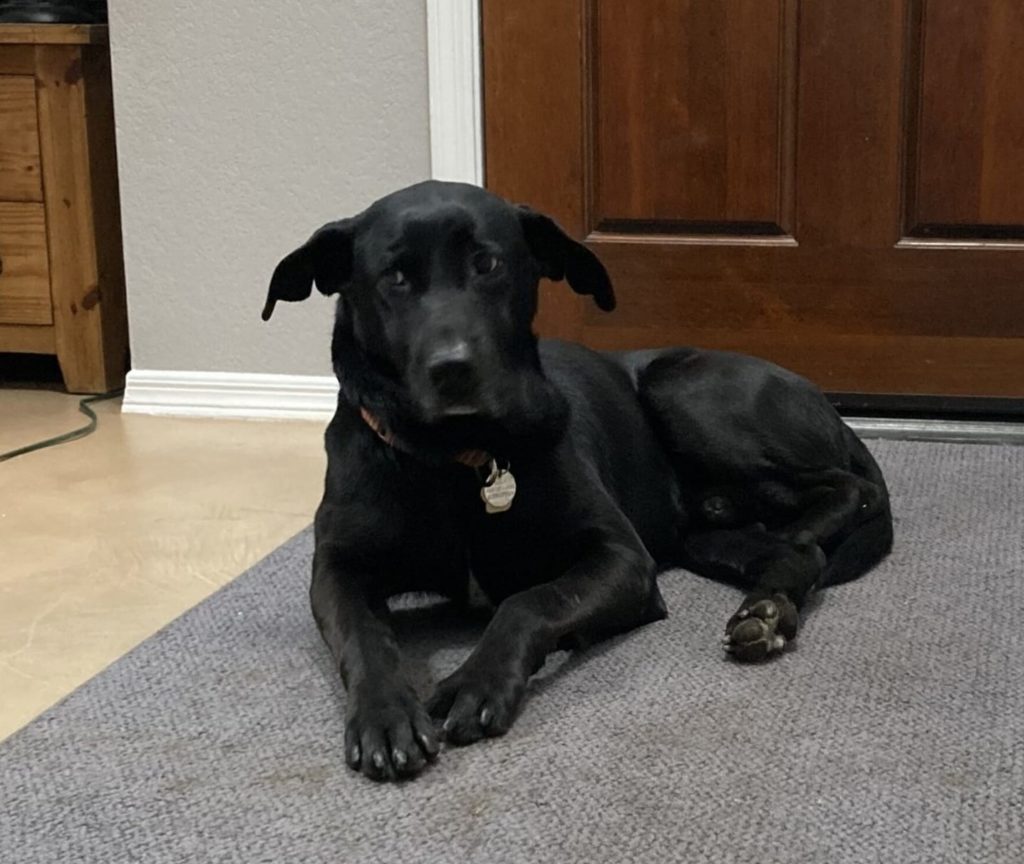 Blake came to SOLR after no one responded to his previous owners “free dog” ad and they decided plan B would be to leave him at the pound. Once in SOLR’s care and evaluated by a vet, it was discovered that Blake had not been well-cared for. X-rays and an ultrasound confirm that he has a mass taking up 2/3 of his stomach. It is unknown if the mass is cancer, but given Blake’s senior age and the size of the mass,  it is too dangerous for him to undergo surgery. Thankfully, Blake will be given the opportunity to live out the remainder of  his life as a SOLR hospice dog. SOLR will see to it that his medical needs and well-being will be compassionately cared for. Blake has already learned how to use the doggy door and thoroughly enjoys an impromptu howling session when the fire trucks pass by his backyard.

Sawyer and Blake are just two of the many dogs in SOLR’s care requiring costly medical intervention. Please consider donating to Be Kind Project this #AZGivesDay as we raise medical funds for SOLR. 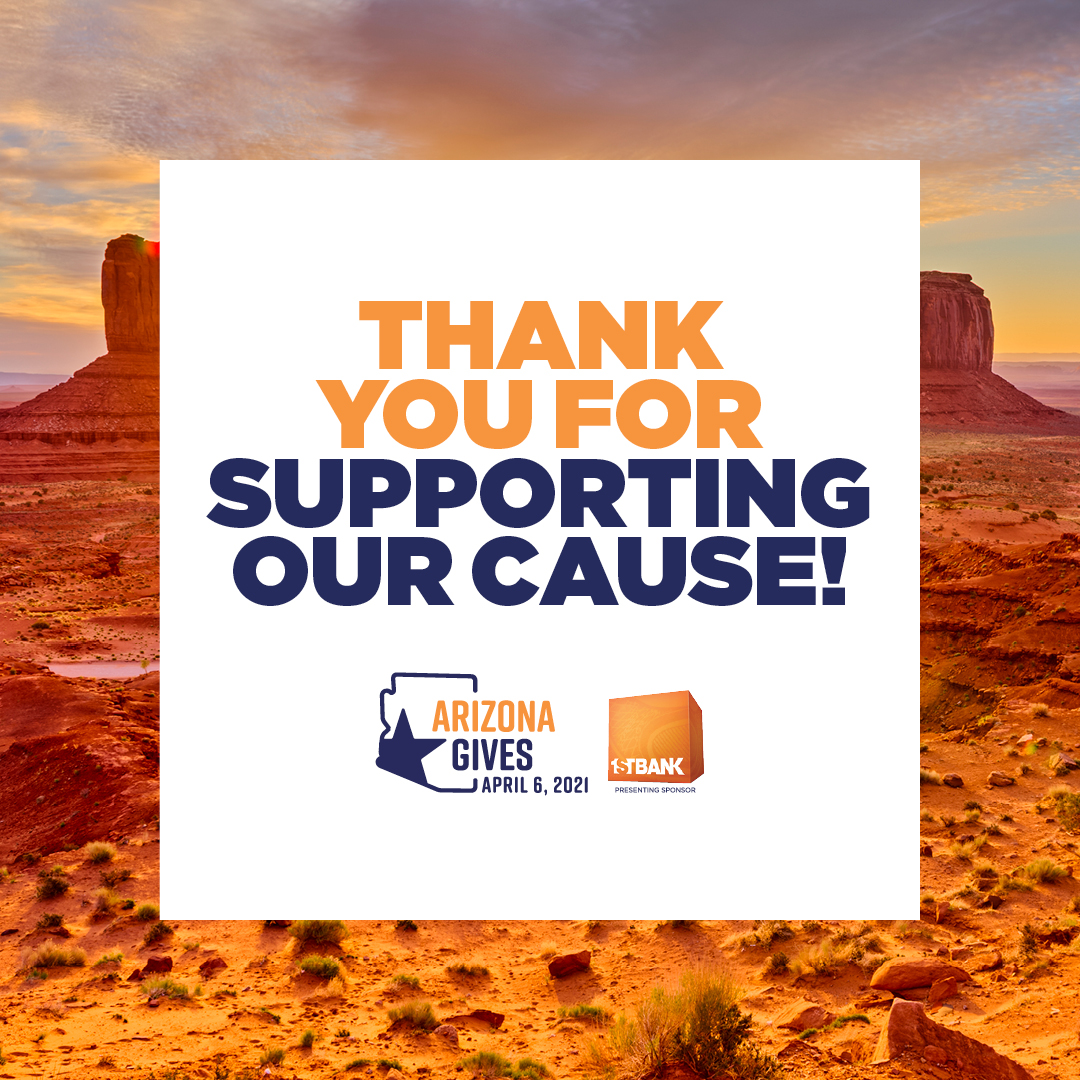 Thank you for your continued support as we #COMMITTOKINDNESS in 2021!